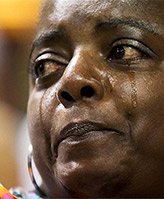 How to Forgive the Unforgivable:

Human beings cannot forgive the unforgivable. As a committed Christian leader in nonviolence, let me explain.

Forgiveness is mentioned in news stories about the tragedy in Charleston, nicknamed the Holy City of South Carolina because of its large number of churches and many houses of worship. Holiness quickly changed to profanity as Dylann Storm Roof integrated a Wednesday night Bible Study. Of course, as would be appropriate to Christian community, the Bible Study is open to all, but unknown visitors are rare and more common in the regular weekend services. On this Emanuel African Methodist Episcopal Church’s website the message says: ‘Is something missing from your life? Are you doing all you can to have a closer relationship with God? If you have a desire to learn more about God, then join us on Wednesdays at 6:00 p.m. in the lower level of the church. We look forward to seeing you.’

An hour before his massacre, Roof asked for the pastor when he entered the church, and sat next to Pastor Pinckney during the Bible Study. The pastor and group warmly welcomed Roof. He later told police that he “almost didn’t go through with it because everyone was so nice to him. But I had to go through with the mission.” The weekly class had begun at 8pm with less people than usual. Normally, around 30 people would attend. But there had been a day long series of meetings and prayers too taxing for some members to remain. Pastor Pinckney decided to proceed despite the late hour and the heat of the evening. Pastor Pinckney asked the Bible Study group to pick up black leather bound King James Bibles and turn to Mark 4:16-20. Jesus’ parable about the good seed was read in turn by the Bible Study group including their new member, Roof. He might have even bowed his head and prayed with them. Then he opened fire on his Bible Study group.

Ironic, because Roof’s first name reminds me of a progressive folk singer who facilitated the peace movement around the world. His middle name speaks for itself, but his last name carries the meaning of protection and shelter. Dylann Storm Roof, with an ironic name, plotted and killed his Bible Study with his 45-caliber Glock pistol which weighs 35 ounces when loaded with a 10-bullet magazine and a 4.5 inch barrel.

So, why can’t we forgive this? The crux of Jesus’ life is forgiveness—the most powerful theology and practice of Christianity. But Jesus mentions something most of us do not want to hear. There is an unforgivable sin: “Therefore I tell you, people will be forgiven for every sin and blasphemy, but blasphemy against the Spirit will not be forgiven (Matthew 12:31)”. From my theological vantage point, what recently occurred in the Holy City of Charleston is blasphemy against the Spirit. Going into a holy place, worshipping in the spirit of the faithful at the end of a long day, and no doubt Roof identifying with the good seed in Jesus’ parable of Mark 4: 16-20, all constitute blasphemy against the spirit as blood, bone and sinew split as Roof’s Glock pistol explodes.

So, how do we forgive the unforgivable? Strangely enough, some of the best minds and hearts teach us that we cannot; after all, forgiveness is something only God can do (Mark 2:7). Further still, even though God only forgives, human beings are responsible for entering into the entire process of forgiveness called reconciliation. Some people have no such worldview for forgiveness and reconciliation. For example, a brave Bible study participant rose to tell Roof in the midst of gunfire. “You don’t have to do this,”

Roof replied, “Yes. You are raping our women and taking over the country.”

We learn from Jesus’ forgiveness that it is an instrument with which to engage both in critical thinking and heart felt theological reflection by holding up a particular issue or question into the light of God’s life. In other words, Jesus’ approach of forgiveness helps us discern the mind of Christ in our tragedies. In the aftermath of Roof’s blasphemy we face specific issues such as gun control or whether or not a confederate flag is moral. Becoming less naïve in this way brings us in touch with gravity of how we affect each other in the full presence of God. Being less naïve is frightening, however, because it is much safer to live in my own comfortable constructs of reality in which it is always the other who is wrong—in need of my forgiveness.

Our Anglican Communion does well by participating in the Holy Spirit’s work of reconciliation. We need to guard against the human recalcitrance of blaspheming God’s Spirit. Whenever God’s Spirit is displayed in Holy Scripture we see unity in diversity. We blaspheme when we resist the Holy Spirit’s work. And we blaspheme the Spirit when we become mere voyeurs of the suffering of others. We naively say in our hearts that we would never cause such tragedy as occurred in Charleston. But we do when we fight each other as Christians while millions are neglected, hungry, trafficked, shot by Glock pistols. As we fight over who is in or out of communion, we blaspheme the Holy Spirit.

Instead of blasphemy, Jesus requests our cooperation in the Spirit. And at the risk of cheap grace, what rescues us from the unforgivable sin is yet again a return to Bible Study. Jesus gives us grace there as He states, “For mortals it is impossible, but for God all things are possible (Matthew 19:26)”; including forgiving the unforgivable. What keeps this from being cheap is that although this is God’s doing, we are called to cooperate with the Holy Spirit.